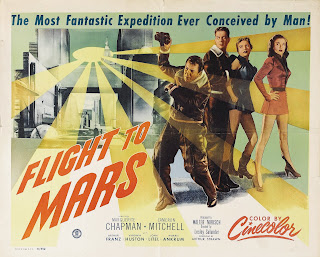 Filmed in 11 days using sets, sound effects, and space suits from the more successful Destination Moon, this little film is, in my opinion at least, highly underrated. Sure the story is predictable, sure the acting is far from brilliant, sure the special effects are sad - but check out Marguerite Chapman! She alone is worth the price of admission.

Cameron Mitchell stars as the jaded war reporter chosen from thousands of applicants to accompany the first Mars expedition. Along for the ride is Carol Stafford, girl scientist (her words, not mine), played by Virginia Huston. Carol has a majorly huge crush on her boss, the leader of the expedition and who, inevitably, falls for the beautiful Alita (Chapman), daughter of the leader of the pro-Earth party. This of course leaves things wide open for the intrepid reporter to swoop in and pick up the shattered pieces of the girl scientist's heart.

Workman-like and plodding as it sounds this mess is the true plot of the movie. Oh, and the fact that the anti-Earth faction of Mars' leaders want to seize the Earth ship, reverse engineer it and use the technology to build a fleet of ships to invade Earth. But this at times seems more of a sub-plot, really.

Despite its many short comings I love this movie. Science fiction movies from the early fifties seem so innocent looking back on them from our 21st century vantage point. America's fear of the insidious commie and the constant threat of global annihilation at any moment seem silly to us. But people living through that era did not have the luxury of knowing every was going to work out in the end and the Soviet Union would die an ignoble death without a single nuke hitting Moscow. Those were scary times and little bits of fluff like Flight to Mars offered an overwhelmed public a few minutes of gee whiz escapism. No harm in that, eh?


If you love classic 50s sci-fi you'll love this Flight to Mars. Recommended.
Posted by Curt Jeffreys at 9:23 PM